Dick Wolf is one of television’s most respected drama series creator/producers and the architect of one of the most successful brands in the history of television, "Law & Order". He is an Emmy Award and Grammy Award-winning producer who has been nominated for 13 Emmy Awards. Also, he is a New York Times bestselling author. Wolf continues to serve as creator and executive producer of all of the "Law & Order"-branded series from Wolf Entertainment and Universal Television, including "Law & Order: Special Victims Unit", entering its record-tying 20th season as the longest-running scripted filmed series in the history of television. He has extended his branding expertise to the Windy City with his Chicago-based series "Chicago Fire", "Chicago P.D.", "Chicago Med" and Chicago Justice" and back to the Big Apple with "FBI" and "New York Undercover".

Additionally, he expanded into non-fiction with Wolf Reality and is the executive producer of the critically acclaimed docu-series "Inside the FBI: New York", "Cold Justice", "Criminal Confessions" and "Nightwatch". Currently, he has several other high-profile projects in development.

His company has produced two award-winning documentaries: "Twin Towers", a short documentary about two brothers, one a policeman and the other a fireman, who lost their lives in the line of duty on Sept. 11, 2001, which won an Academy Award for Best Documentary, Short Subjects in 2003; and "When You’re Strange", an Emmy-nominated documentary about the Doors, which won a Grammy Award for Outstanding Longform Video in February 2011.

In addition, he is an author and his debut novel, The Intercept, is a New York Times bestselling thriller about Jeremy Fisk, a new kind of hero for a new kind of enemy. The follow-up book, The Execution, debuted in January 2014 and, like its predecessor, was both popular and critically acclaimed. The Ultimatum, the third installment of the series, was released in June 2015 from Harper Collins.

Wolf’s "Law & Order"-branded series continue to rewrite television history. "Law & Order", which ran for a remarkable 20 seasons, is tied with "Gunsmoke" as the longest-running drama series on television. It earned 11 consecutive Outstanding Drama Series Emmy nominations - the record for most consecutive series Emmy nominations in the history of television (tied with "Cheers" and "M*A*S*H") - and won the coveted Emmy in that category in 1997. Additional accolades include the highly coveted Peabody Award, the Crystal Apple Award from the New York City’s Mayor’s Office of Film, Theater and Broadcasting, the Writer’s Guild Award for Television and numerous other high-ranking tributes.

Wolf Entertainment’s feature film arm produced "77", directed by Jared Leto, and based on an original screenplay by James Ellroy, and "The Super", a psychological thriller written by John J. McLaughlin and starring Patrick Flueger. Also, Wolf wrote the screenplay for the hit film "School Ties", and he was writer and executive producer of "Masquerade" and writer and producer of "No Man’s Land".

His personal accolades include the Television Academy Hall of Fame (inducted 2013); the International Academy of Television Arts & Sciences’ Lifetime Achievement Award; the 2002 Tribute from the Museum of Television and Radio (now the Paley Center for Media); the Producer’s Guild of America’s Norman Lear Showmanship Award; the DGA Honors; the Governor’s Award by the New York Chapter of the National Academy of Television Arts & Sciences; the 1997 Achievement Award from the Caucus for Producers, Writers, and Directors; the 1998 Television Showman of the Year Award from the Publicist’s Guild of America; the Award of Excellence from the Banff Television Festival; and NATPE’s 2007 Brandon Tartikoff Award. In 2007 Wolf received a star on Hollywood’s world-famous Walk of Fame.

Wolf is an Honorary Consul of Monaco, is actively involved in the principality’s annual Monte Carlo Television Festival and is its primary liaison with the entertainment community. He is the founder (with Marcy Carsey) of the Carsey-Wolf Center for Media at the University of California, Santa Barbara. With his wife, Noelle, he is a benefactor to numerous philanthropic endeavors, including MOXI, the Wolf Museum of Exploration and Innovation, the Alliance for Children’s Rights and the Princess Grace Foundation. He and Noelle, through their Wolf Family Foundation, have also endowed the new Wolf Theatre at the Television Academy.

Every show is born under a death sentence. They just don’t tell you the date of execution.

[Law & Order] has offended the sensitivities of a variety of special interest groups, including, but not limited to Jews, Catholics, Protestants, African-Americans, Asian-Americans, Aryans, gays and lesbians, Italians, Russians, Greeks, conservatives, liberals, pro-life and pro-choice advocates, and the list goes on ad nauseum.

I have ludicrously high hopes that the 'Chicago' shows will be on for a long time because they have settled in, nobody else is making television like this.

The heart and soul of network programming is series programming, the weekly repetition of characters you like having in your house.

I don't think you can really make television based on what you think audiences want. You can only make stories that you like, because you have to watch it so many times. 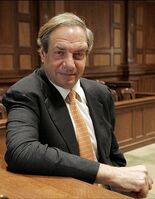 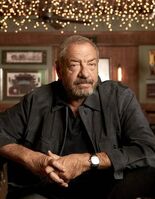 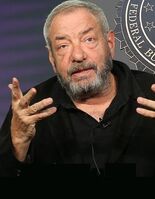 Retrieved from "https://chicago-franchise.fandom.com/wiki/Dick_Wolf?oldid=24023"
Community content is available under CC-BY-SA unless otherwise noted.